Esophageal cancer is the eighth most frequently diagnosed cancer worldwide, and because of its poor prognosis it is the sixth most common cause of cancer-related death. It caused about 400,000 deaths in 2012, accounting for about 5% of all cancer deaths (about 456,000 new cases were diagnosed, representing about 3% of all cancers). Rates vary widely between countries, with about half of all cases occurring in China. It is around three times more common in men than in women. 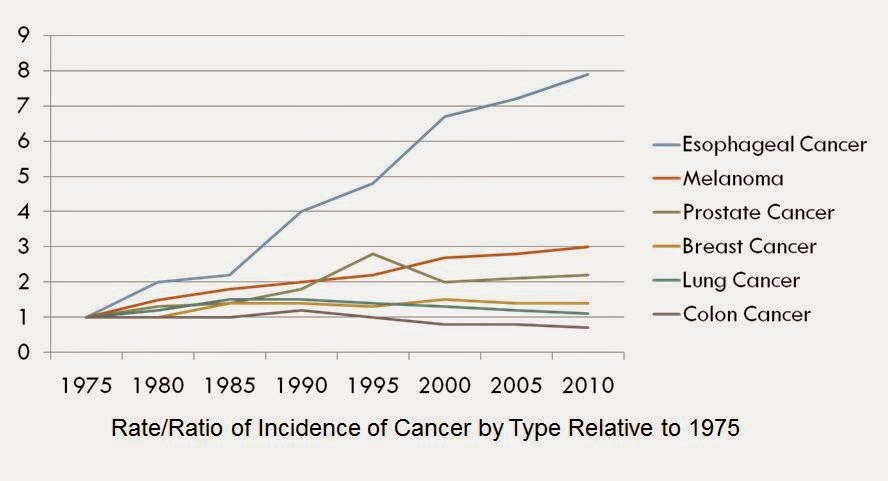 Esophageal cancer (or oesophageal cancer) is cancer arising from the foodpipe known as the esophagus that runs between the throat and the stomach.  Symptoms often include difficulty in swallowing and weight loss.  Other symptoms may include pain when swallowing, a hoarse voice, enlarged lymph nodes (glands) around the collarbone, a dry cough, and possibly coughing up or vomiting blood.

The two main sub-types of the disease are esophageal squamous-cell carcinoma (often abbreviated to ESCC), which is more common in the developing world, and esophageal adenocarcinoma (EAC), which is more common in the developed world.  A number of less common types also occur.  Squamous-cell carcinoma arises from the epithelial cells that line the esophagus.  Adenocarcinoma arises from glandular cells present in the lower third of the esophagus, often where they have already transformed to intestinal cell type.

The most common causes of the squamous-cell type are: tobacco, alcohol, very hot drinks, and a poor diet.  The most common causes of the adenocarcinoma type are smoking tobacco, obesity, and acid reflux.  The two main types (i.e. squamous-cell carcinoma and adenocarcinoma) have distinct sets of risk factors.  Squamous-cell carcinoma is linked to lifestyle factors such as smoking and alcohol.  Adenocarcinoma has been linked to effects of long-term acid reflux.  Tobacco is a risk factor for both types.  Both types are more common in men and in the over-60s.

Prominent symptoms usually do not appear until the cancer has infiltrated over 60% of the circumference of the esophageal tube, by which time the tumor is already in an advanced stage.  Onset of symptoms is usually caused by narrowing of the tube due to the physical presence of the tumor.

The diagnosis is best made with esophagogastroduodenoscopy (endoscopy); this involves the passing of a flexible tube with a light and camera down the esophagus and examining the wall.  Biopsies taken of suspicious lesions are then examined histologically for signs of malignancy.  Additional testing is needed to assess how much the cancer has spread.  The Computed tomography (CT) of the chest, abdomen and pelvis can evaluate whether the cancer has spread to adjacent tissues or distant organs. Esophageal endoscopic ultrasound can provide staging information regarding the level of tumor invasion, and possible spread to regional lymph nodes.  Staging is based on the TNM staging system, which classifies the amount of tumor invasion (T), involvement of lymph nodes (N), and distant metastasis (M).

Prevention includes stopping smoking or chewing tobacco.  According to the US National
Cancer Institute, "diets high in cruciferous (cabbage, broccoli/broccolini, cauliflower, Brussels sprouts) and green and yellow vegetables and fruits are associated with a decreased risk of esophageal cancer." Dietary fiber is thought to be protective, especially against esophageal adenocarcinoma.

Treatment involves a set of options.  Early-stage EAC may be treated by surgical removal of all or part of the esophagus (esophagectomy), although this is a difficult operation with a relatively high risk of mortality or post-operative difficulties. Esophagectomy is the removal of a segment of the esophagus; as this shortens the length of the remaining esophagus, some other segment of the digestive tract is pulled up through the chest cavity and interposed.  This is usually the stomach or part of the large intestine (colon) or jejunum.  Reconnection of the stomach to a shortened esophagus is called an esophagogastric anastomosis.

If the person cannot swallow at all, an esophageal stent may be inserted to keep the esophagus open.  A nasogastric tube may be necessary to continue feeding while treatment for the tumor is given, and some patients require a gastrostomy (feeding hole in the skin that gives direct access to the stomach).

Chemotherapy and radiotherapy are also solutions.  Chemotherapy depends on the tumor type, and may be given after surgery, before surgery or if surgery is not possible.  Radiotherapy is given before, during, or after chemotherapy or surgery, and sometimes on its own to control symptoms.

Laser therapy is the use of high-intensity light to destroy tumor cells while affecting only the treated area. This is typically done if the cancer cannot be removed by surgery.  Photodynamic therapy, a type of laser therapy, involves the use of drugs that are absorbed by cancer cells; when exposed to a special light, the drugs become active and destroy the cancer cells.

Patients are followed closely after a treatment regimen has been completed.  Frequently, other treatments are used to improve symptoms and maximize nutrition.

In general, the prognosis of esophageal cancer is quite poor, because most patients present with advanced disease.  By the time the first symptoms (such as difficulty swallowing) appear, the cancer has already well progressed. The overall five-year survival rate (5YSR) in the United States is around 15%, with most people dying within the first year of diagnosis.

Nowadays, some desperate patients look for help outside modern medicine.  A dietary supplement sold in Florida is believed to do more than boosting our immune system, although the Food and Drug Administration (FDA) has not formally endorsed it yet.  Back in December 2012, as Aisha was fighting hard, I desperately tried to reach out to Dr. Enersto Crescenti’s team for their solution.

The good news is that listening to stories of cancer survivors (Bart Frazzitta and Jerry Poisson) gives hope that cancer in general, and esophageal cancer in particular, will be defeated. For good! With God’s blessings.

Posted by Rigobert Pinga Pinga at 9:38 AM No comments: 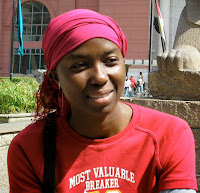 As January 11 is fast approaching, I thought I could share with you the tribute that friends of Aisha paid to her almost a year ago.

Listening to all these testimonies (Part 1 and Part 2) forces me to reflect on what should matter the most in our life. And "love" is one answer. Maybe THE answer.

On this Friday morning, we are exhausted physically and emotionally. Aisha and I do not talk a lot. Her voice is fading; it’s getting closer to a whisper. But she can smile and she can't stop smiling. I want to capture the moment with my phone camera. She offers to give more: a little message for our daughters, and a special one for me. I can see some tears running out of her eyes. She cries, for the first time, since she was diagnosed with cancer. 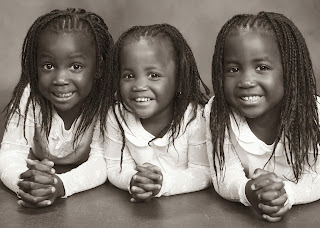 The travel time to Baltimore seems to me an eternity. I have not had time to ask myself what would happen after the surgery. I am confident. Extremely confident… The tumor will be taken out and we will return home a few days later. All we know for sure is that Aisha is going to lose her vocal chords. But this is the least of our worries!

The music program on WGTS 91.9 seems to be made ​​for us. Soft, relaxing and inspiring. But at this early hour of the day, all my thoughts come back to me, consistently. Our life is going to change radically… All I need now is a vacuum in me, so I can be better filled with God’s grace. I do not know what is going on Aisha’s mind. I am so afraid to ask… But her smile reassures me more than millions of words.

The week has been so hectic: we went to the Philadelphia branch of the Cancer Treatment Centers of America (CTCA) with the hope that the diagnosis would be different from what we were already told. Long story short: the second opinion was no different from the Johns Hopkins’. We quickly decided to keep the initial plans unchanged. The surgery which was optional in the beginning of the treatment is now considered critical. 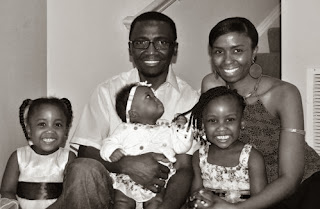 And here we are in this corridor, facing the reality of esophageal cancer and its complications. As Aisha is being taken to the surgery room, as I see her waving me goodbye, I can’t handle it anymore… I burst into tears. Things are falling apart. Literally!

The surgery is planned to last at least 8 hours. I need to fill my mind with some good memories. I start watching some family pictures, including those of our wedding. I am so into it, that I do not notice the presence of Pastor Norm and Kingsley. They are here to accompany me in what would be an unexpected path: God’s path.

On This Day, A Year Ago

A year ago, on this very day, Aisha posted her last message "Recovery: Week 8 and 9".

While she certainly had the courage and willingness to share with you her path with this rare, yet terrible disease, she was called to God's home on January 11, 2013.

She fought the fight, filled with hope and an unconditional faith in God's mercy. Despite the pain she went through, she never gave up, proving to the disease that its life was "short and near the end" as she pointed out in her profile. 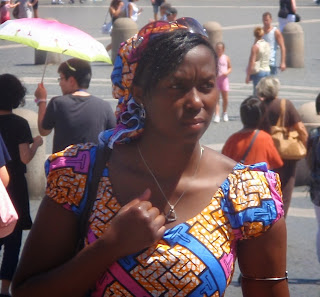 I miss my friend, the mother of my daughters. I miss my wife. But I am convinced she preceded me in a better place...

Rigo.
Posted by Rigobert Pinga Pinga at 3:44 PM No comments:

I had my upper gastro endoscopy on Friday September, 28.  Th Dr send some samples for biopsy and we are waiting for the result in 2 weeks.

There are up and down during recovery. Only remember to have someone ( people) very close to you. You would always talk to him/her ( them) no matter what. Hold on to something, your faith your family your friends, your job, books, movie... Do your best and don't let the recovery be your main focus. It comes will a lot of stress.

I had a wonderful week. I pray a lot and it make me feel better and more hopeful. It's great when at night in my pain I ask God to take it and let me sleep a while and it really happens. Sometimes my husband is the one praying for me and things really happen. The lessons here is that things might not happen your way, but remember they do happen open your eye to see and your ears to hear. You are never alone, God is always by your side. I know not all of us with a throat tumor are christian or believer. I can speak only for myself and this is my story.


Stay blessed and thank you all for your love and prayers...
Aisha
Posted by Aisha Pinga Pinga at 8:27 AM 6 comments: